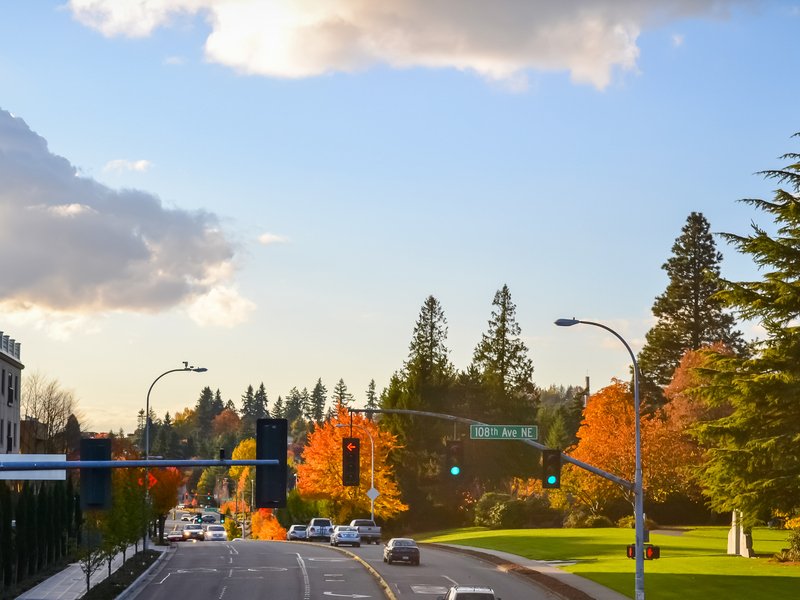 You found the right website if you are searching for homes for sale in Redmond, WA. Our website has EVERY Redmond home for sale in Washington listed with Northwest MLS (NWMLS).

Redmond is a city in King County, Washington, United States, located 15 miles (24 km) east of Seattle. The population was 73,256 at the 2020 census, up from 54,144 in 2010. Redmond is best known as the home of Microsoft and Nintendo of America. With an annual bike race on city streets and the state’s only velodrome, Redmond is also known as the “Bicycle Capital of the Northwest”.

Native Americans have lived in the Redmond area for about 10,000 years, based on artifacts discovered at the Redmond Town Center archaeological site and Marymoor Prehistoric Indian Site. The first European settlers arrived in the 1870s. Luke McRedmond filed a Homestead Act claim for land next to the Sammamish Slough on September 9, 1870, and the following year Warren Perrigo took up land adjacent to him. The rivers and streams had so many salmon that the settlement was initially named Salmonberg. More settlers came, and with the establishment of the first post office in 1881, the name of the community was changed to Melrose. The new name was derived from the Perrigos’ successful inn, Melrose House, which upset McRedmond. After becoming postmaster, he successfully petitioned to have the name changed to Redmond in 1883.

The abundant forests and fish of Redmond provided jobs for loggers and fishermen, and with those jobs came demand for goods and services, bringing in merchants. The logging industry expanded significantly in 1889 when the Seattle, Lake Shore and Eastern Railway built a station in the center of town. The first plat for Redmond was filed on May 11, 1891, encompassing much of the area now known as downtown. After reaching the necessary population of 300, Redmond was incorporated on December 31, 1912.

Redmond experienced an economic downturn in the 1920s. Prohibition forced saloons to close, cutting off a large portion of the city’s tax base. The forests were declining after heavy logging, causing lumber mills to shut down. The deforested land was suitable for farming. Agriculture became Redmond’s primary business, keeping residents fed during the Great Depression. When the U.S. entered World War II, shipyard jobs and other wartime work came to Redmond.

After the war, Redmond’s expansion began in earnest. The city expanded over thirty times larger in area through annexations between 1951 and 1967. From 1956 to 1965, Redmond was bordered by the town of East Redmond, which was formed by rural homeowners and later dissolved by the Washington Supreme Court. The completion of the Evergreen Point Floating Bridge across Lake Washington in 1963 allowed Redmond to flourish as a suburb of Seattle. In 1978, the U.S. Census Bureau proclaimed Redmond the fastest growing city in the state. Many technology companies made the city their home, and the increasing population demanded more retail shops. By the late 1980s, Downtown Redmond had become “a series of strip centers surrounded by parking lots”, sparking plans for a mixed-use revitalized downtown.

Redmond underwent a commercial boom during the 1990s, culminating in 1997 with the opening of Redmond Town Center, a major regional shopping center on the site of a long-defunct golf course. In recent years the city has been experiencing growing pains as a result of its rapid expansion, particularly in the areas of urban sprawl and traffic congestion. During rush hour it can take upwards of two hours to travel from the beginning of SR-520 at Avondale Road to downtown Seattle, a mere 16 miles (26 km) away. These problems are being mitigated by the expansion of SR-520 and the Evergreen Point Floating Bridge, as well as the planned light rail service via the East Link Extension from Seattle to Redmond to open in 2023.

Several companies in the high-tech industry are based in Redmond. The largest employer in the city by far is Microsoft, which moved its headquarters to Redmond in 1986. Microsoft has over 40,000 blue badge FTEs (full-time employee), 45,000 orange badge contractors (as of June 2012, there are over 94,000 workers, and over half are contractors), and more than 8 million square feet (750,000 square meters) of office space in the Seattle area Eastside region, primarily in Redmond, with additional offices in Bellevue and Issaquah (90,000 employees worldwide). In June 2006, Microsoft purchased former Safeco’s Redmond campus at 4515–5069 154th Place NE for $220.5 million.

Other companies with headquarters in Redmond include Nintendo of America, Genie Industries (now part of Terex), Physio-Control (now part of Stryker), Visible.net, WildTangent, Solstice (acquired by Samsung) and Data I/O.

In 2015, SpaceX and Hyperloop Genesis announced opening of a facility in Redmond. Their focus will be R&D and manufacturing for a proposed internet communications satellite constellation and new transport systems.

Unlike Bellevue and other neighboring cities, the city of Redmond does not have a business and occupation tax on income. However, to help offset the costs of road improvements for businesses, a business license fee of $55 per employee was approved in 1996. As of 2016, the fee is $107 per employee.

Redmond Derby Days is an annual community festival held the second full weekend of July and celebrated its 75th anniversary in 2015. It began as a race around Lake Sammamish called the Redmond Bicycle Derby in 1939, and since then has become a multi-day event including a bicycle criterium, parade, entertainment stages, beer garden, local food offerings and activities. It also includes a carnival with rides and attractions and a fireworks display at dusk on Saturday.

Performing arts in Redmond include the Eastside Symphony and the Second Story Repertory theater company, as well as artists who play at the Redmond Performing Arts Center. Redmond has a collection of outdoor sculptures throughout its streets and parks, many of which are part of a rotating sculpture exhibition.

Redmond Lights is an annual community festival held the first Saturday of December. It features a special guest each year, a tree-lighting conducted by the mayor on city hall campus, a luminary walk on the Sammamish Trail and Redmond Central Connector with musical and light stations along the way to Redmond Town Center where there are many special attractions such as a carousel, skating rink and food sampling.

The Old Redmond Firehouse is a center for local teens. It has become a hub in the thriving Eastside independent music scene. Local bands perform here with concert style speakers.

The Concerts at Marymoor is an annual summer series of concerts held at the amphitheater in Marymoor Park. The venue has been host to artists as diverse as Norah Jones, Peter, Paul & Mary, Rob Thomas and Duran Duran. When visiting the Seattle area, Cirque du Soleil has set up in Marymoor since the 2004 tour of Varekai when a concrete base was built for them to set up on. Since then, tours of Corteo (2006), Kooza (2010), Amaluna (2013), Kurios (2015) and Luzia (2017) have played in this spot. Marymoor also hosted the Warped Tour and Cavalia in 2012 and 2014.

Redmond Saturday Market is the oldest farmer’s market in the Seattle area’s east side. This market is held on Saturdays from May through October on approximately 8,000 square feet of land near the Redmond Town Center. The City of Redmond has approved an ordinance that the current market site be preserved for its community and historic significance.

According to the city’s website, Redmond has 47 public parks totaling over 1,351 acres (547 ha). Many of these are neighborhood parks with picnic tables and sports fields or courts. The largest park within the city is not owned by the city – it is King County’s 560 acres (2.3 km2) Marymoor Park, one of the most popular in King County. It features a climbing rock, a model airplane flying field, a 48-acre off-leash dog park, an outdoor theater, sports fields such as baseball and soccer, a playground, tennis courts, a community garden, cricket pitch, and a velodrome, which hosts the FSA Star Crossed – Redmond cyclo-cross competition in September.

The city offers over 59 miles (95 km) of public trails for hiking, bicycling, and horseback riding. The Sammamish River Trail connects to the Puget Power trail, the Burke-Gilman Trail (in Bothell), and the East Lake Sammamish Trail.

60 Acres Park is known for its soccer in the spring through fall and RC electric airplanes and gliders in the winter time.

Most of Redmond is part of the Lake Washington School District, which also encompasses Kirkland, and parts of Sammamish and Woodinville. The public schools in Redmond include ten elementary schools, eight middle schools, and two high schools. The district also offers “choice” schools at all levels for alternative schooling needs. The city’s two high schools are Redmond High School and Nikola Tesla STEM High School, a choice school.

DigiPen Institute of Technology and a secondary campus owned by Lake Washington Technical College is currently being leased to the City of Redmond for a Community Center are located in Redmond.

The city is home to Redmond Regional Library, the second-largest branch in the King County Library System.

Redmond is bordered by Kirkland to the west, Bellevue to the southwest, and Sammamish to the southeast. Unincorporated King County lies to the north and east. The city’s urban downtown lies just north of Lake Sammamish; residential areas lie north and west of the lake. Overlake, the city’s second urban center, is to the west of Lake Sammamish. The Sammamish River runs north from the lake along the west edge of the city’s downtown.

Redmond, like most of the Pacific Northwest, has a mild climate for its latitude, but still gets all four seasons. Summers tend to be warm and dry, with low rainfall and sunny or partly sunny from June to September. Winters tend to be cool and wet, with November being the rainiest month. Snowfall is uncommon, with the most common cold air being in a form of a high pressure system, driving out the rains from the area. However, snowfall is not as rare as in other cities like Seattle near the moderating effects of Puget Sound. The average warmest month is August. The highest recorded temperature was 111 °F (44 °C) on June 28, 2021. On average, the coolest month is January. The lowest recorded temperature was −7 °F (−22 °C) in January 1950. The maximum average precipitation occurs in December.

Redmond has a mediterranean climate (Csb) with warm to hot summers and cool winters.

New to Market in Redmond